Butta: Heading Off The Rails through Europe with Snak The Ripper

ILL-LEGITMATE  tour with  SNAK THE RIPPER 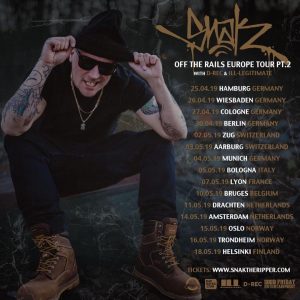 THREE WEEKS … then we touch down in Europe and start lighting it up with Snak The Ripper on the ‘Off The Rails Europe Tour Pt.2‘.

Representing SDK & Stealth Bomb Records, Snak is heading back to take a second bite out of the continent touring his latest album ‘Off the Rails’ … but this time ILL-Legitimate will be firing things up to make it even liver!

Starting in Germany on April 25th we won’t have finished carving through Europe until May 18th after our last three shows in Scandinavia … rolling 12,000km Off The Rails? … Dope!  This is a premium opportunity to show Europe what we’re about, and to work with one of Canada’s livest rappers. Mad respects to Snak for putting us on, and D-Rec for spinning on the 1’s and 2’s.

Jumping stages through Europe has been a long-term goal of mine, so for me, it doesn’t get any better than this. To be representing with ILL-Legitimate, connecting with heads across the continent, and working with a beast like Snak … it’s unreal.

Stay tuned with our insta and facebook pages … if we don’t see you in Europe, we’ll bring Europe to you!

Snak The Ripper | Off The Rails Europe Tour 2018