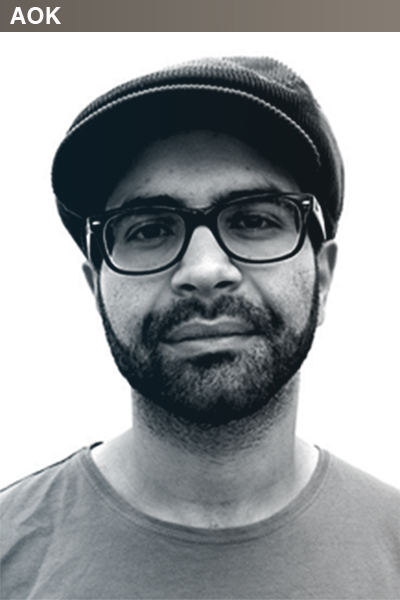 Writer and all around good guy, Omar Mouallem, Assault. Of. Knowledge., has been published around the globe, from New York to London. He’s the author of two books and a 2008 Sex-Positive Journalism Award winner. The Edmonton representative who got his start in the rural town of High Prairie, Alberta, sharpened his skills in the Vancouver hip-hop scene for over a decade. His hip hop style is infused with light and heavy, satirical and serious, smooth and raw elements. Called a concept artist by some, he works around his interests in politics, women, love, religion, science, and hip hop itself.

His debut album, If You Don’t Buy This CD the Terrorists Win, dropped in June 2008 to rave reviews from Toronto to Beirut. His second book AND album, Q Without U, released in 2010, combined children’s literature with adult-oriented hip hop into a unique production… an illustrated rap storybook! It is with his swan song release, Edmontosaurus, that AOK returns as the raw-spitting MC, and intellectual force that makes him an integral member of the ILL-Legitimate movement.

Since 2015, AOK’s assault of knowledge has taken a more direct approach though his work as an investigative journalist. Amongst significant awards for his publications and prestigious interviews with none other than Canadian Prime Minister, Justin Trudeau, he has recently written a new chapter in his book and claimed his biggest title… that of Papa Omar.

AOK has now retired as a rap artist. Some of his final musical contributions are undoubtedly his hardest and technically most advanced… and his brief return to rap can be heard in high def on the upcoming crew album -STITCHED-!!!