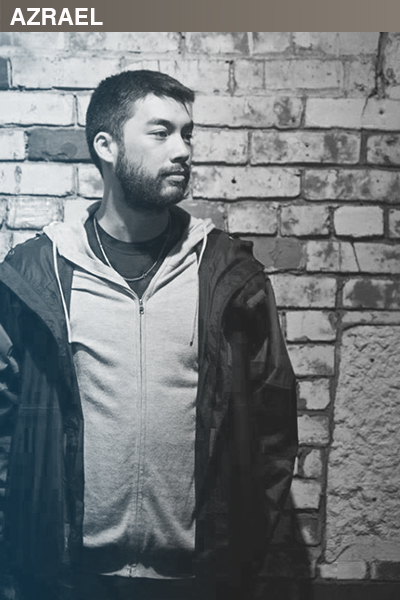 Nothing has come easy for Azrael Raps Good. Born to a single teenage mother in the struggle, the Vancouver emcee is used to making something out of nothing. Coming of age in the early-mid 90’s, he was captivated by his dubbed tape cassettes of rap and immediately identified with the disenfranchised ethos of that era.

He needed to be heard. Around the age of 13 he began writing his own raps and recording himself on his ghetto blaster. Even with the recordings as trash as they were at the time, it sparked such a burn in the belly that he couldn’t quit. He was insatiable.

Dutifully, he honed his approach in high school after meeting producer Aalo Guha. They went on to form Castheadwork along with Clé and release a cult classic album Natural Patterns in 2002 which was his introduction to the music scene. Tearing stages and killing verses after that became his signature. He began performing as an underager in bars around Vancouver, including the Piccadilly, in the early days of the long-running legendary Monday Night Live.

This then led to meeting long-time friends and collaborators Chadio, Shay Faded, Kaboom and, with Guha, set the foundation for the Imaginations Treetrunk crew. Within a span of roughly 4 years they released several albums, toured throughout vast western Canada, and became a known name on the west coast and in the underground Canadian hip-hop scene.

Azrael rapped good. He was part of several groups, compilation albums, and guest features but needed to branch out further to find his own voice. In 2009 he released his first solo album The Doldrums, produced entirely by Aalo Guha.

Unfortunately, time ran its course and things came to an end for Imaginations Treetrunk a couple short months later. Azrael absolutely needed to continue, however. He linked up with producer Sythe of the ILL-Legitimate crew and the two instantly hit it off, recording weekly and, now writing entirely in his head, eventually created his second solo LP, the Vancouver cult classic album Pocket Watch.

As a live act Azrael Raps Good has a commanding stage presence and is known for his smooth delivery. Not only rap sets, he’s taught hip-hop workshops for students in high schools from Vancouver to Surrey. As an avid performer, he has rocked stages alongside artists such as Pharoahe Monch, M.O.P., Devin Tha Dude, Sean Price, Raekwon, Onyx, Smif N Wessun, Killah Priest, Rapsody, Wordsworth, Ill Bill, Snak The Ripper and more. In 2014, he and Anonymouz joined hip-hop legend Kool Keith for six dates on his cross Canada tour.

After taking a much needed personal break from music Azzy is feeling great and is back on the scene. With nothing standing in his way, he is making up for the lost time – and then some. With his trademark unique dulcet voice he captures listeners whether on a track that is hype, heady, or heartfelt. A true lyricist.

The future looks bright for Azrael Raps Good. With a slew of new things on the horizon he continues to create and has a lot of doors yet to open. Keep him on your radar because he’s always turning heads and making top notch dope shit.

Find all the links to MADDHAPPY – Azrael’s newest release – in our Music section.