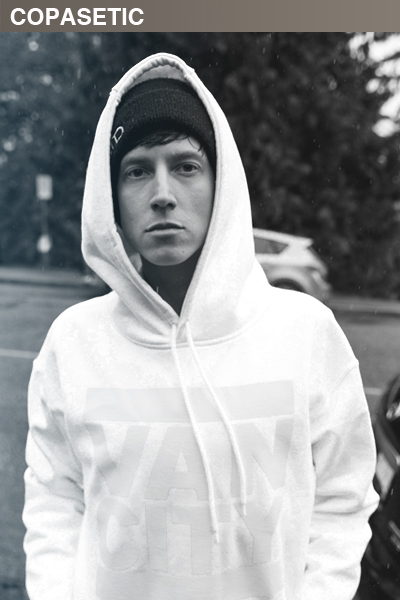 Battles are lost in wars that are won; and Copasetic is living proof. But the war is not over and it may not ever be. Copasetic is a leader now, not just with ILL-Legitimate, nor just as an artist in the Vancouver community, but as an ambassador for the culture of battlerap the world over… and the future is bright.

It takes real skill but more than that it takes time, hard work and uncompromising vision to make the kind of waves Copasetic has made in battlerap culture. An avid supporter of the artform at every stage he prides himself on sponsoring and promoting leagues and artists around the world. His passion has helped support and grow talent at a local and international level. All of which is overshadowed by the infamy of his exploits inside the ring.

The reason is, angles. Copasetic is always playing the angles, pushing the boundaries, thinking outside of the box, treading in the unexpected and what makes this approach especially effective is the chess-like level of planning that preludes his execution. Right from the start in his first official battle for KOTD, taking on the then untouchable Lil G, he’s been innovating. Whether he’s creating characters (with complete costumes), breaking out into song mid-battle or introducing a variety of unorthodox theatrics, in each battle he has offered audiences something completely out of left field. Often his antics disqualified him from winning yet his stock continues to rise because his focus is on being purely entertaining; creating something original and while winning the hearts of new fans hungry for something different.

Copasetic joined ILL-Legitimate in 2005. He spent a lot of his early time as an artist developing his talent and producing different forms of art, from sketches to poems to beats, graffiti, short films. That said, when he did emerge as an emcee, the feature verses that he provided have all been dominant and remain memorable. He can be heard killing it on ILL projects including Risskant & Anonymouz’, Klassiek (2009), Azrael’s, PocketWatch (2010), P-Butta’s Gotta Tic?! (2010), Anonymouz’ Smoking Joints (2012) and Sythe’s Sythe (2013). His real breakout really came on ILL-Legitimate’s, The Album (2012), where he takes centre stage, creating hooks and song concepts.

His strength is in song-writing and lyrics but his experience in film as well as his experience training in graffiti with Australians Nuf’n, Polka (RIP) and Seiko, has helped tremendously in maintaining the artistic flair of ILL-Legitimate.

On a beat he is recognizable by his emotionally potent angles, clear and melodic voice and smooth rap style with an uncanny ability to create intricate yet crystal clear lyricism. Utilizing his love of storytelling and filmmaking experience he wrote and directed the video for “Wrinkle Free”, the 3rd single off of ILL-Legitimate: The Album, with Sythe and Nicky Scarfo. After a positive response from fans for his work on ‘The Album’, Cope left his mark in Vancouver hiphop with the critically acclaimed release of his solo debut album Dragon Soul Zero (2014).

2014 was also the same year Copasetic made his battlerap debut for King of the Dot vs Lil G, still one of the highest viewed battles on the channel. In 2017 he made an impact at KOTD’s World Domination VII, one of the biggest hiphop events in the world and followed that up with two top tier performances against Esem, a veteran from the LA scene, and the legendary Marv Won. Cope is becoming increasingly more popular as his stock among his peers continues to rise, and it doesn’t seem like anything will slow him down. COPASETIC has now become one of the prominent battlers in Canada and leaders of the scene in Vancouver.

BUT FIRST… fam is fam. As with all of us, we always bring it home. Copasetic can be heard once again with his melodically clean style, jazzy timing and potent angles all over the long-awaited, highly anticipated…