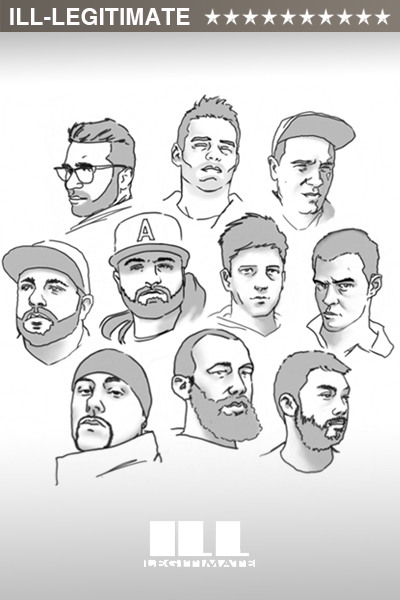 ILL-Legitimate is an international hip-hop collective based in Canada and consisting of 10 artists all originating from different parts of the world.

What started out as a collection of solo artists alike in their mentality and united in their quest, quickly bonded together into one unit – united thanks to the soundscapes provided by Sythe and Scarfo’s production – but ultimately by a force bigger than all of us. We gathered in the same places to record, we worked and trained together, tested and developed our skills; pushed each other to always achieve higher feats of excellence. Through the years and the ups and downs of life we grew closer and kept growing, attracting more like-minded soldiers, eventually culminating in this ILL brotherhood. It was over time and with much synergy that we realized that we also all sounded right together. When we combined forces, the only objective was to attack the art as hard we could and to out-do the last guy. The result was a collaboration of an even higher degree, offering a multitude of styles, experiences and perspectives that surpassed anything we had done individually. ***Read the whole story of how ILL-Legitimate formed in our ABOUT section***

Over 10 years there have been a total of 20 albums released under the umbrella of ILL-Legitimate Productions. Members Anonymouz, Attikus, Azrael, Butta, Copasetic, Nicky Scarfo, Risskant, SLMNDR and Sythe all represent the same crew even as solo artists, united by the same artistic philosophy, sounds and aspirations. However, ILL-LEGITIMATE as a full group launched their first album, “ILL-Legitimate: The Album” officially in 2012/13.

The explosive presence that the ILL brings live to the stage has taken them on a mission around the world. Members have toured across Canada, Australia and Europe and have opened shows for some of the biggest names in Hip-hop on some of the biggest stages for hip-hop worldwide. Raekwon, Immortal Technique, Aesop Rock, Souls of Mischief, Kool Keith, Pharaohe Monch, Smif-n-Wesson, Killah Priest, La Coka Nostra, Rhapsody & 9th Wonder, are just some of those artists the ILL has heated the stage for.

The rap team without borders rose fast in 2013 and 2014 with 5 videos launched, consistent local performances, and significant tours that resulted in exponential growth in numbers. But in 2015, Life happened in a major way, putting 5  ILL members out of commission for legal and family reasons.

After 3 years of silence, in what some would call a move of artistic suicide, ILL-LEGITIMATE relaunched on a new level, with elevated polish, a structured operation and stacks of fresh work. They announced their new project, “Stitched”, as well as new members to the team, a brand new website/store, 2 new singles “Snake Pond” and “Boogie”, with video directed by Stuey Kubrick, and a Kickstarter Campaign that finished in the top 25% of all music-related crowdfunding campaigns.

Following up on these successes, the ILL released 3 new singles and produced 2 more videos related to “Stitched”, and also produced a new clothing line called “ILL-Gear”, CHECK THE STORE! All this leading into their eventual European Tour, as the official openers for Snak The Ripper’s “Off The Rails Tour Pt.2” touring through 8 countries in April/May of 2019.

ILL-LEGITIMATE is already looking towards their next move. With 4 more singles and 3 more videos planned including features from BC heavyweights Junk & Brevner, and a tear across Canada in the works, expect to hear from us in 2019!

Available soon through ALL major networks !!!!!

All of them!! Check out each of our ILL-Artist Profiles to see what each of us thinks!

Check out our ILL-Video section for the latest!