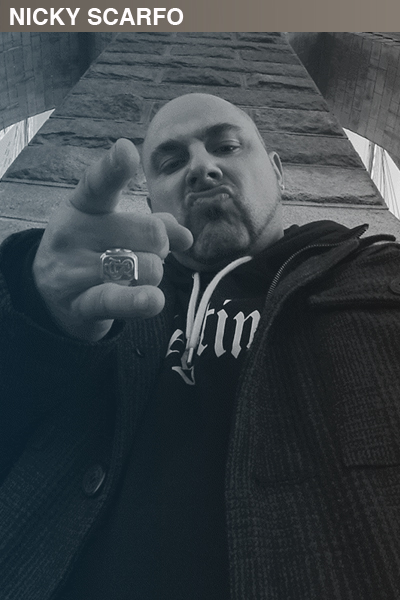 The boss of the crew hardly needs an introduction, but that hardly stops him from providing degenerates with non-so-friendly reminders of just who the fock he is. One of the founding members of ILL-LEGITIMATE crew and major contributors to its sound throughout the years, Scarfo is a beast on all aspects from the boards to the business. You wanna know something that will boggle your friggin’ mind? Just utter the name “Chopfather” in many neighbourhoods and everyone will be aware that pasta must be “Al Dente”… OR ELSE!!!

But really, can you believe this? Someone had the nerve to write this review in the paper…

Nicky Scarfo (March 197? – ?) is a member of the ILL-Legitimate Syndicate who eventually became the boss of the ????? family after the death of Rap and Hip-Hop. During his criminal career, Scarfo was described by some as psychotic, cruel and vicious, but sometimes considered to be very sweet by the grandmothers down the street. From many accounts of his former criminal associates who testified against him, he would want to hug someone if he was shown the slightest bit of disrespect or even if he was stared at. But he also was good at baking cakes and was the chef at a local soup kitchen for the poor, malnourished Hip-Hoppers…starving for real music. Scarfo orchestrated a particularly ruthless regime and ordered over a dozen tingz during his time as boss at The Butcher Shoppe. What was in those friggin’ sausages anyway? He was often described by informants as cold-hearted, elegant, and friggin’ narcissistic. He enjoyed the celebrity wiseguy lifestyle and was an admirer of Tommy Two-Times, Johnny Roast-Beef, and Vinnie Carbone. Scarfo would scan newspapers for his name and made sure his soldiers carried out things in public to create a constant atmosphere of fear. Scarfo had few scruples and approached organized ???? activities such as beat-making to generate a WOPPING $7.36, while many other bosses avoided such activities known to attract law enforcement scrutiny. It was these methods that ultimately led to other weak producers being eaten by the competitive nature of the Friulano Beast, himself…Nicky Scarfo aka The Chopfather.

Regardless of public opinion, here are the facts! Scarfo co-founded ILL-Legitimate Productions with Anonymouz and Sythe, and in 2006 he co-produced A.no.nym.i.ty, the first project to be released under ILL-LEGITIMATE Productions. He has the ability to find samples and chop the holy shit out of them like mortadella cubes, henceforth his friggin’ name, which, by the way, was given to him and he carries with respect. Each track is essentially an emotionally-charged last car-ride with an axiomatic 1930’s mobster/butcher hybrid clenching both a smoking Tommy Gun and a razor sharp Beat Cleaver.  His quest to rid the planet of the bad music, even though we all know, rats don’t live long…

Nicky Scarfo has an unorthodox production style that inexplicably integrates hard, gritty elements with soft, subtle yet dark tones, and relies on samples from old, rare ethnic and, well, super weird artists. This “Dark wop ninja syndicate theme music – Anonymouz” not-so-delicately begs the question, “Would you like some more pepe nero finemente macinato and freakin’ cheese on your pasta fazool?”

While studying for his Master of Science degree overseas, Scarfo was instrumental in extending ILL-Legitimate’s influence throughout the European hip-hop community, working with artists in Holland, Sweden, Italy and Germany. In 2009 he was the co-executive producer on the album, Klassiek from Risskant & Anonymouz and in 2013 he also co-produced ILL-Legitimate crew album… THE Album. After concluding successful tours of The Netherlands and throughout Europe, including featuring spots for EPMD, Immortal Technique, Wu Killabeez, La Coka Nostra, and Aesop Rock, he moved back and forth from Vancouver, Canada, Amsterdam, The Netherlands, and Roma, Italia. Currently he resides among olive groves and vineyards eating only pecorino cheese, olive oil (yes, this is a food group), raw 1kg Fiorentina steaks, and porchetta all’Ombrellino in the Hills of Castelli Romani.

And as we slide into the future, be on the look out for the collaboration between Butta and Scarfo: ILL KENTS an Australian-bourne creation filled with super deep, dark ILLNESS!

And also … The ILL Butcher Shoppe Vol.1, a collaboration between Azrael and Scarfo, coming early 2019 and The Butcher Shoppe Video Series by Nicky Scarfo which, quite frankly, should have been out already.

BUT FIRST, we must all prepare ourselves for long-awaited and coveted release marking the return and reunion of ILL-Legitimate!

Scarfo salutes you if you are a person of honour and willfully extends his left nut to his vying enemies!

Be ready for the release…or else!!