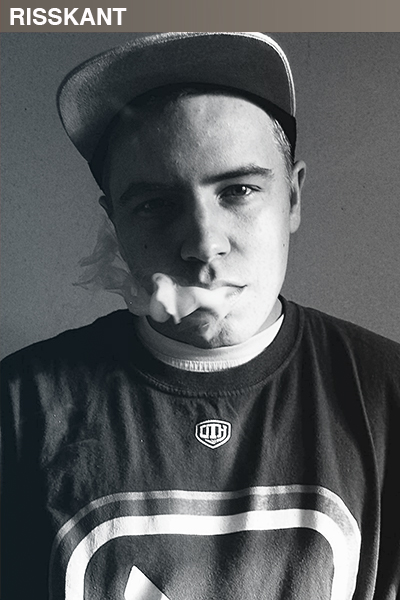 Before English ever existed it sounded like modern-day Dutch. In fact if you listen carefully, you can really hear the similarities. “ILL-LEGIT, killer shit” means the same thing in both languages. Hailing from Dordrecht, The Netherlands, rapper Risskant is one of the most prolific and celebrated hip-hop artists of his country. He was the winner of both the public award and the first prize in the Urban Category at the 2007 Grand Prix of Zuid–Holland, and boasts more releases than any other Dutch artist.

Risskant is Boom Bap Hip-Hop to the core with a solid 5 independent solo albums to his name: T’Is Mooi Geweest (2006), Nieuwe Droom (2007), Voedingswijzer (2009), Wat Gaat het Worden (2010), and Makkelijk te Snappen, Moelijk te Begrijpen (2012). After having released his fourth and third solo album in early 2009, Risskant met Anonymouz and they created Klassiek, a unique bilingual international cooperation between Canada and the Netherlands in 2009. After the success of Klassiek The W was invited to become a full member of ILL-LEGITIMATE. He lives his music in the truest form; everything he does is for his art. Having such dedication and ability makes him one of the strongest emcees on the roster.

Riss has also has released a series of compilation projects. In March 2011, Risskant got to work on an 11-track EP in collaboration with master-producer Sensei Walingh, who has worked together with DJ Premier, Sean Price and House of Rapz to name some. In March 2013, Riss formed the group, Kort Sluiting, with Dutch emcees Pro6veraal and Kaascouse: an experimental dub-step inspired collaboration, resulting in the album KSEMFD in 2014.  In 2015, Risskant extended his global reach and got the whole ILL-Legit crew involved when he released his international collaboration project with Tasmanian heavyweight producer, Seize, entitled, Continents Collect: The ILL-LEGIT Sessions.

After the sudden passing of his father in 2016, Riss retreated back into his solo station to create an ode to his deceased father, the album entitled: W.I.M.. Wim Rissema was a drummer and you can hear that inherent in Riss’ flow when he does his thing.

Always staying true to his true school, boom bap roots, the ever-prolific Riss released another group project, called Nuttin but the real R.A.P.S. with his new group R.A.P.S. (Risskant, Ace, Promo and Seize) on May 31, 2018 and is back at it again.

Risskant was a force on the European Tour and wasted no time dropping DE KAMER (with Ad Rem) – the return of the Die-Manic Duo for the first time in 10 years!

2020 looks to be no different for the fire machine as he continues to build and put out material at a rate like few others. Risskant just dropped his new album Tiefuszooi featuring production from underground heavy hitters Chu Beats of Dope DOD and Hashfinger.