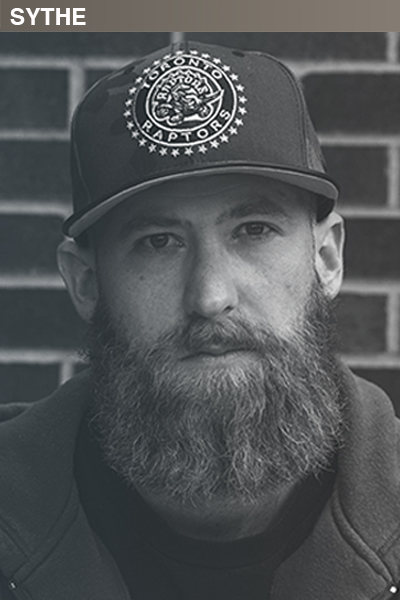 The name Sythe has been synonymous with the gritty yet elaborate beat-craft that defines the ILL-Legitimate sound. His hard work and tireless pursuit of the symbiosis of harmony and rhythm have been cultivated over the last decade. Over time, his craft has veered more and more towards the raw organic, dark swing and dirty jazz. Sythe IS the basement.

Though focused mainly on beat-making, Sythe cuts heads off as an emcee. He was heard first on “Beatsmartz” from the A.no.nym.i.ty album in 2006 and he’d go on to feature both talents on international albums, and eventually his own.

In 2010, he released his first full album, Pocket Watch, a fresh, jazz/hip-hop collaboration concept project with Azrael. Following that album, the two combined for one more project, similar in it’s elements, but with a harder, more aggressive approach. The five track EP, Medium Rare can be found for FREE download on this site. To promote the two projects, they went on a tour of Canada in 2011.

His attention to detail and work ethic have awarded him the lasting respect that both his production and lyrics deserve on an international scale. After so many collaborations and features, the man himself took centre stage in the form of his debut, self-titled, solo album, Sythe. 12 songs influenced by his love of hiphop and highlighted by the many faces of rock and roll, maintaining the continuity and consistency of his previous work to truly cement his musical brand.

Appearances by artists familiar with ILL-Legitimate such as…

Sythe’s favourite thing to do aside from digging records is moving the crowd with the crew and his live resume is as large as anyone in ILL-Legit. His first love is still behind the boards as he continues to plays a major role in production and direction.

Feel the Sythe at his peak on -STITCHED-!!!