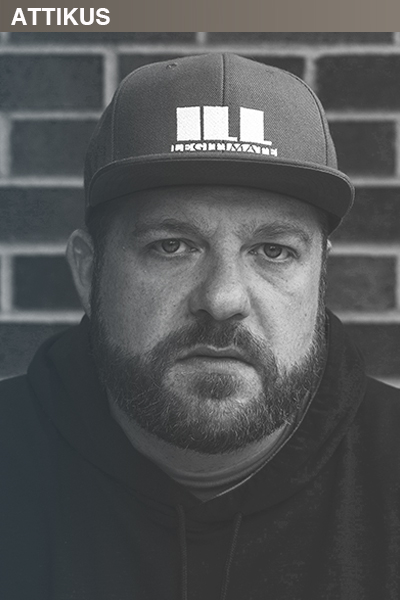 Jesse Mitchell, aka Attikus, is a widely respected performer and songwriter. A veteran Canadian entertainer, Attikus, “is an instant conjurer of mental imagery” – ( Hiphopvancouver.com).
Having toured for over a decade throughout Canada, USA, Central America, the Caribbean and Europe, Attikus is a well established singer and emcee known for intense and powerful performances.
A former member of one of Vancouver’s most legendary hip-hop bands, GroundBreakers, and also rap/soul group FATTIKUS (with Fatty Down) Atti is a grinder that has played hundreds of shows. From opening for big name acts, to festivals such as Shambhala, to house parties, Atti has been exposed to a variety of stages and has always embraced the challenge to move every form of crowd he encounters.
From 2009 to 2016, Attikus was signed to Wandering Worx Entertainment, a film company and music label. He dropped two albums: Boo Radley (2012) and The Madness (2014), and a mixtape, Before The Madness (2015). It was during this time, in 2011, that Attikus headlined the Hip Hop Por La Paz festival in Havana, Cuba.
From 2016 to 2018, Attikus ran two popular monthly performance nights in Vancouver (ATTIKUS PRESENTS…) and in New Westminster (STREETLIGHT SESSIONS). Atti used these successful performance based events to put on music peers from across Canada and the US in a showcase to help build their fan bases in Vancouver. He built a network of tour contacts through this venture. This helped Atti tour California in 2018 in support of his acclaimed album UPROARSandDOWNPOURS, produced by renowned beatsmith Vago of The Technicians. In 2018 Attikus also joined worldwide hip hop collective ILL-LEGITIMATE, which boasts members in Canada, Italy, Netherlands, Australia and China. Soon after joining, the crew launched an extremely successful Kickstarter campaign in support of the full length album STITCHED. In spring 2019, Atti joined his crew ILL on a tour of Europe as support for Snak The Ripper. The tour spanned 14 shows in 8 countries and the crew drove 12,000kms.
Upon returning from Europe, Attikus released a passion project with fellow ILL members Sythe and Sythe’s brother Wickberg. Under the group moniker THE WAS (Wickberg, Attikus, Sythe), the ILL-LEGITIMATE offshoot released the EP SONGS4SIXTO. Inspired by singer/songwriter, and subject of the 2012 Oscar winning documentary SEARCHING FOR SUGARMAN, Sixto Rodriguez. SONGS4SIXTO featured covers, interpretations and original music based off Rodriguez’s often over looked catalog of brilliant music. The project was recorded on Bowen Island with platinum record sound engineer Robert Bailey.
In July of 2019 Atti moved to Ottawa, Ontario. Currently he is recording new music with friend and Tribe Called Red founder Jon Deck as well as ILL-LEGITIMATE. Atti has plans to hit the road again soon both solo and with ILL-LEGITIMATE. After all, his nomadic soul demands it.

Attikus joining the crew was a no-brainer and came just in time to contribute two important verses on two of our biggest singles on -STITCHED- !