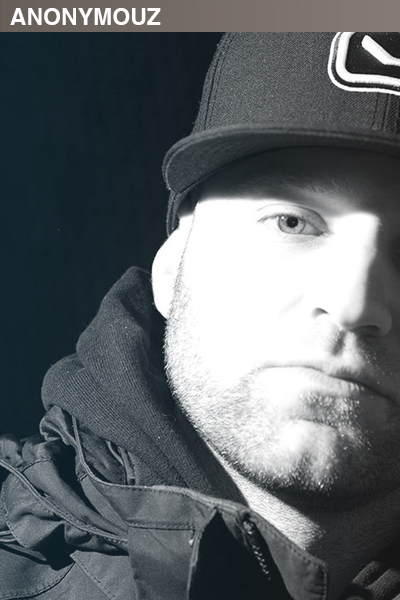 One of the founding members of the ILL-Legitimate crew; Anonymouz is more than a name, it’s a philosophy. It’s a  statement of commitment to content, a universal approach, and the removal of the ego as a sacrifice to the art.
Born in Rome, Italy, and raised in the Vancouver, Canada suburb of Richmond, ANON experienced diverse multiculturalism that honed a focus on hip hop culture. It also pushed his deep thinking mind to pursue and achieve a Bachelor Of Arts with a Philosophy major  from the acclaimed University Of British Columbia in 2008.
Although content driven in his approach, ANON has an undeniable presence on the mic. His husky, smoked out voice and hard hitting flow quickly propelled his career out of North America and overseas into foreign markets. He traveled to Australia in 2008 where he worked on the Red Tape Renegades Compilation, appearing on Vol.1 (2008) and toured the country with Robby Balboa and The Optimen the same year. The next year in Europe, ANON released a cultural collaboration album, Klassiek, the first of its kind, with now ILL-LEGITIMATE teammate, Risskant (2009), supporting the release with a tour of The Netherlands and Belgium. ANON’s stage resume is impressive. He has appeared live on bills alongside EPMD, Immortal Technique, Aesop Rock, ILL Bill and many more as both a solo artist and member of his international hip hop crew ILL-LEGITIMATE. As a solo artist, Anonymouz has released  an.o.nym.i.ty (2006) and Smoking Joints (2012).
As one of the leaders of ILL-LEGITIMATE, ANON has been instrumental in a spectrum of duties including, writing, recording, producing, promotion, marketing, and managing for all the ILL-LEGITIMATE releases since the crew’s inception including “ILL-Legitimate: The Album”. ANON has also been heavily involved in an array of solo releases from the ILL’s other 9 members.
In 2018, ANON spearheaded the relaunch of ILL-LEGITIMATE’s Operations through a successful Kickstarter campaign for the crew which culminated in a highly successful 14 show, 8 country tour of Europe.
Most recently, ANON has been preparing a project he considers his life’s work; a triple album based on Dante’s DIVINE COMEDY entitled: Hip Hop Anonymouz – documenting Anon’s fall from grace; rise; and eventual transcendence out of “Hip Hop”  in three volumes: Inferno, Purgatorio and Paradiso.
Everything ANONYMOUZ does is further evidence of his drive and tenacity. Not content with just his solo endeavours, ANON is consistently hands on with all things ILL-LEGITIMATE. He is a true example of a multitasker with the ability to selflessly take on any role required in both the artistic and financial areas of the music business. His brain is always storming making him a force of nature to be reckoned with…

The time is near…