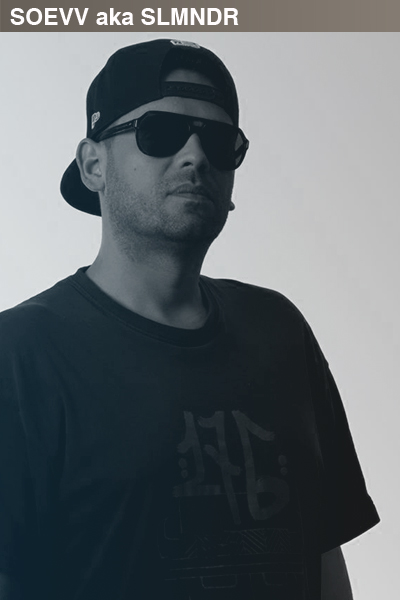 Filippo Soevv, also knows as SLMNDR (or Dr. fILL to his ILL brothers) is a renowned italian Hip Hop artist, graffiti-writer, graphic-designer and a professional film director, producer and editor.

Originally from the Italian rap group, La CasaMadre with TotòNasty, K9 and Dj Dust, he is now one of the newest members to join the international Hip Hop collective, ILL-Legitimate, not just as an MC but representing in visual and multimedia.

His career in Hip-hop began as a graffiti-writer back in 1992, hitting the streets of Pesaro and creating his personal wild-style day by day. He was the co-founder of many Italian’s Graffiti crews between 1996 and 2004, working with artists such as Blu, Sea Creative, Fulo, Sera, Boost, Slork, Koso and many others. He painted many murals around Italian cities with some of the best international graffiti-writers and toured with his art to many important events. In 2003 he was called to paint the interior of Miami’s Diaspora Vibe Gallery with Atomick and Quake Roc of the legendary TSC crew and, in this occasion, he became inducted as an honorary member of the creative collective called 28K based out of Florida, USA.

Soevv moved his first steps into the music production as an underground rapper in 1998, with the release of the tape, Storie che non ricordo. That year he also founded the independent production-house, Figli Di Ra. He played in many Hip Hop events with his freestyle show, collaborating with artists like Esa and Lucariello. In 2000 he came out with the limited edition vinyl EP, I quattro giorni del sole containing the track “Dissenso Generale” featuring Italian heavyweight, Fabri Fibra, and produced by the great DJ Shocca. In 2004, he moved to Rome and he worked on graphic and video, solo and collective projects, and he was invited to many events to showcase his talent for mixing different cultural backgrounds. Notably, he produced the single “Cancer inferno” with Notarui and Sawerio as a member of the band called 176Fango, which is part of the independent label NoSheek and also sponsored by the website Espella and Madder clothing company. In 2014, he released new music album as SLMNDR with La CasaMadre called FreddoFuori. This hard and heavy album features TotòNasty, fellow ILL-Legit man, Anonymouz, and Paragraff from Reims, France.

Since joining ILL-LEGITIMATE this man has wasted no time! Notwithstanding his incredibly busy life, and with production of Master Sythe behind him, he has nearly completed his first solo album. Releasing through ILL-LEGITIMATE PRODUCTIONS, Canada Line features artist from a variety of countries.  With Azrael, Anonymouz, P-Butta, Sythe, Risskant, Paragraff, Sloop Tha Loop, La Kost, Word, Slat, Gian Flores, Genesi, and Totò Nasty there to help fan the flames, Canada Line, is slated for release in Winter of 2019…

BUT FIRST… LOOK OUT for Soevv’s first feature as part of the ILL-LEGITIMATE crew with his FUOCO verse on the big single “Doo Wop” coming soon on: